Well, this will be my last post I should imagine for a bit, though I might play with some photos and post them later in the week... I'm sitting home in Adelaide, eating watermelon in my PJs (yay Gin for bringing me watermelon - you're right, it is the best thing ever!) and thought I'd post the last final days before I hang out the first load of laundry and then crash out. Ryan is already asleep on the couch - he made it through half a suitcase before fatigue grabbed him!!

Well, when I last wrote, I was about to head off for yet more shopping... :) I had a fun time driving around checking out shoe stores in Hampton and Newport News before crossing the bridge to Norfolk. Can you believe I STILL didn't find the dream boots that I have been searching for?? Ah well, had a fun time trying. The way home from the Norfolk mall was not so fun - I did a huge tour of some of the less salubrious areas of Hampton Roads in the dark and I seem to have lost the "accelerate and pray" method of driving that is needed for the interstates of Virginia during rush hour. Eventually, I made it back to Randy and Lucy's to meet up with Ryan and quickly change for dinner. 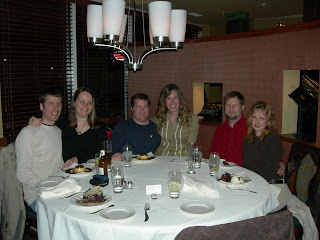 Don't we make a nice looking group? From left to right, Ryan and I (duh), Jack and Robin (Ryan's sister and BIL) and Bryan and Nancy (Nancy is Lucy's daughter). We went to a new area of Newport News which has been developed since we were last in Virginia, called Port Warwick. It's a lovely little place - will be interesting to see how it develops character in the next few years. The meal was amazing - especially the chocolate mousse gateaux dessert.

On Thursday, Robin brought her kids over as did Nancy and we had a crazy, noisy, kid-filled day! Nancy, Robin and I did sneak off to this great store for an hour or so, leaving four kids under 7 behind :) and did some last minute shopping. I found some fabulous candles again, but I knew Ryan would go mad if I bought any more wax so I was good and only bought two tops, a stubby holder and some earrings... The highlight of the day for Ryan was taking his nephew, Jared, to show him the family military collection. Many members of Ryan's family have served in various roles and since it was Jared's birthday on Saturday, he was allowed to choose something to inherit. He ended up choosing a huge, decommissioned WWII shell (and Robin told us the next day that he was so excited by it that he slept with it in his bed that night - waking up all smelly and musty!!) It was really sad to say goodbye to Robin and the kids and I cried yet again and Ryan didn't... Honestly!! I had to convince Ryan to accompany me on a late night trip to Walgreens to make me feel better...

The next day, we got up and did the final bits of packing before Randy and Lucy drove us over to the airport in Newport News. We stopped for lunch and were nice and early to check in...then we found out that our flight had been delayed by high winds in New York. Grrr! What made this really disappointing is that we had booked tickets to see Company on Broadway and because of the delay, we had to ring up and cancel. Very disappointing as I have only managed to see one show this trip :( Still, our flight finally left just after 6pm and we made it to our hotel by 9ish. We decided to head out to dinner to a Mexican place that Ken took us to, when we were in New York at New Year's. GREAT Margaritas!! We even got to sign the wall as we left - 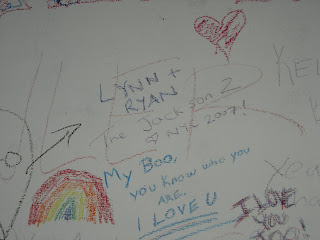 As we left the restaurant, it was pretty darn cold but that lovely husband of mine still indulged me in a girlie dream - to ride around Central Park in a horse-drawn carriage at night. 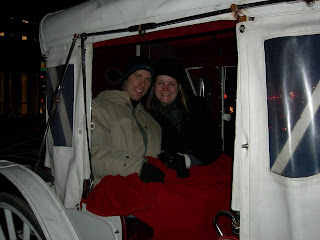 It was so gorgeous. All the tourists from New Year's had gone home, I think, because as we went through the park, we couldn't hear any other carriages. It hasn't snowed much this year but the snowfall this week was just heavy enough to stick so the park was blanketed in the lightest touch of white. We passed the ice rink (which was deserted), the carousel, the Chess House and the Great Lawn - all silent and wintery....gorgeous!

Coming home, I took this great shot of the library which I'm going to post just because.... 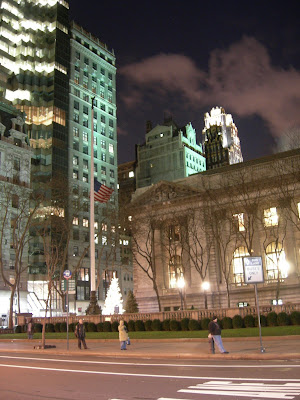 The flights back to Australia were pretty uneventful. Ryan slept more than usual which was good cause he wasn't as crabby as usual :) I apparently slept through some pretty bumpy turbulence which I'm pretty pleased about. We had icecream in Tokyo. Sydney airport was very dull. And my mum picked us up in Adelaide with as much excitement as she usually does... my brothers will know what I mean. She didn't try to leap the barrier this time though. :P

And now we're back to the mundane - laundry, tidying, thinking about school starting next week. Sigh. We had a fabulous trip though and I'm loving unpacking and seeing all the stuff that I bought in my month of shopping frenzy! We ended up buying one BIG new suitcase and a smaller gym bag specifically for all the candles that I purchased but managed to fit everything in and make it back in one piece!

So bye for now, will post pics in the week as I get a bit more organised - I have over 270 shots to look through!
Posted by LinkyLou at 8:13 pm 3 comments: