Drawing to a close

It's been a busy last week here but not a lot to say. We've been hurried with last minute trips around the state to say hello to lots of people that we thought we had a lot of time to catch up with! I must remember to start booking nights out earlier next trip! We've been especially sad to have missed catching up with many of our ex-Denbigh High colleagues who have moved on from DHS - you know, it would have been a lot easier if y'all had stayed in the same building!! Ryan's grandmother has not been well which has been worrying and obviously, time consuming as she lives in Suffolk which is quite a distance from where we have been staying with Ryan's sister's family. However, we WILL be back sometime and hope to catch up with those we missed as a first priority. 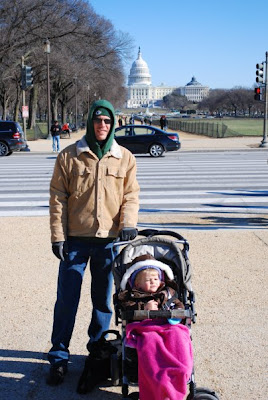 Not too many photos to share - just one of Ryan and Cassie in Washington DC. We went up for a quick visit last weekend, to catch up with friends and see some of the museums. Bob and Kirsten were fabulous hosts as always and it was a delight to meet their son for the first time. We ate a ton of food and had a lot of fun, hanging out. On the Sunday, the Fatzes sensibly stayed home and Ryan and I braved a sunny, but below freezing day to go and see some sights. Ryan was especially keen to visit the National Archives and see the original documents of the Constitution, the Declaration of Independence, the proclamation that freed the slaves and many other relics of American history and government. I was thrilled that there were no lines and the buildings were well heated :) I took the pic (left) on the mall in the walk between the Archives and the Museum of American History where we went afterwards - it was so so so cold but once again, Cassie refused her gloves so we were unable to do too much walking to see the monuments. We had brave plans to visit the new WWII memorial which was in construction last time we visited, but the Arctic wind blasting up the Mall from the Potomac River changed our minds!!


Thankfully, there's been a change in the weather over the last few days - mid to high 50s F (about 13-15 Celsius) and we have perceived it as so warm, we've spent a fair few hours outside! We took Cassie and her cousins to Colonial Williamsburg for more photos on Friday - Jared and Cate were very patient as they not only have a paparazzo mother who is an awesome and avid photographer but now they have a photo mad aunt to deal with too! I took most of those photos in RAW format though so I am dying to get home and start playing with them in my processing software!


Today, we will be seeing a few of the cousins and Cassie will get one last crazy playtime with the older kids as we leave for New York tomorrow. Sadly, it's raining here and the forecast is for more in NYC but we figure we'll spend tomorrow at the Met which is always great anyhow. I found a great deal on a 4 star hotel on Times Square so that will soften the blow of departure hopefully! We arrive home on Thursday morning and have our first day of meetings for the new school year on Friday so all of this will seem like another world! We've had such a blast and again leave wishing it was cheaper and closer so we could do this trip more often. Cassie has had such fun, as have we. Love to all here and there - bye for now!
Posted by LinkyLou at 4:56 am No comments:

After living here for two years way back when, it's nice to visit places that are familiar and sentimental, and also to discover new haunts. For the last few days, we've been doing just that: 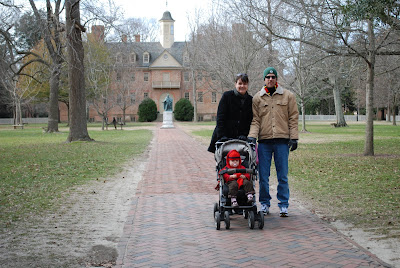 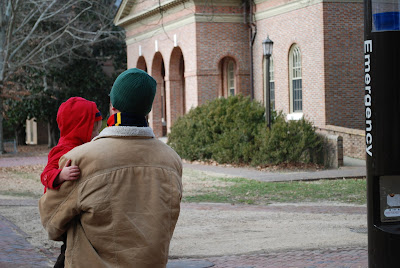 College of William and Mary, in Williamsburg - where Ryan got his Masters in Education. 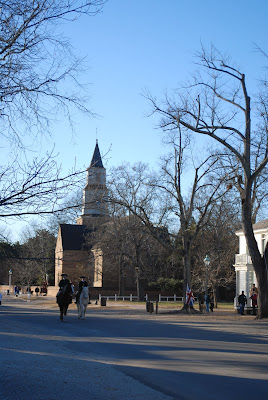 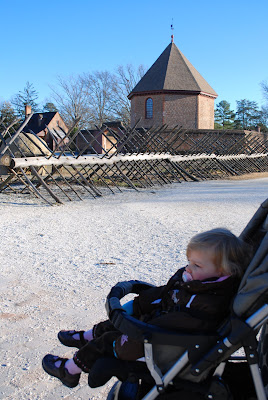 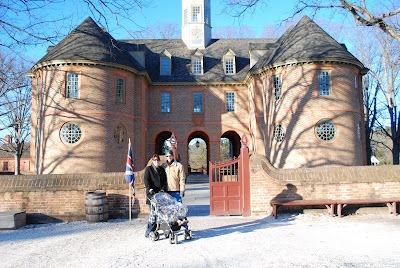 Colonial Williamsburg
and today we spent the day in Norfolk, which is a nearby city, reminiscing at Waterside about the club there where we spent many a youthful night... It was my first visit to Norfolk in daylight that didn't involve the mall there. Very exciting and quite enlightening - who knew it was quite this pretty! 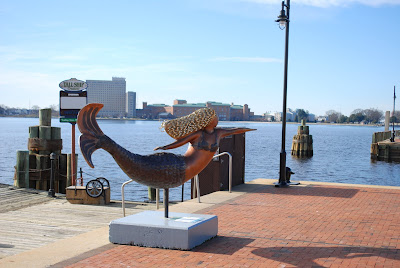 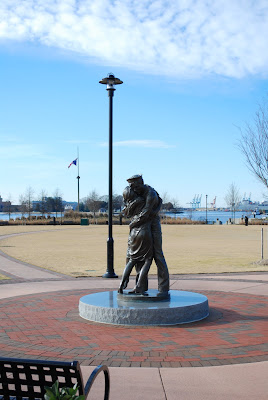 We also went to a very cool museum called "Nauticus" which is a combination of Naval History, 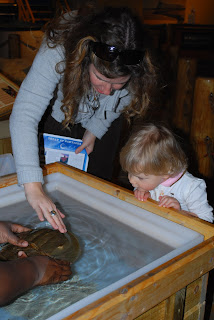 shipping history and aquarium. Being near freezing out and in the beginning of school term, the museum was absolutely empty so we just let Cassie run wild and she had a blast. She especially loved the touch tanks - see left, patting a Horseshoe Crab with Aunt Robin. This did lead to an interesting moment at the baby sharks tank where she almost launched herself in! No patting baby sharks, Cassie!! A very fun day in all, and of course, Ryan was very happy to be able to play all the flight simulators that the Navy use. Tomorrow is Friday again, and we are planning a "quiet" day - running some errands, eating Mexican food for lunch, perhaps visiting the Indian Reservations nearby and then dinner with relatives to celebrate the birthday of one of the young cousins. This weekend, we're heading up to Washington D.C. too. We're going to visit and stay with a friend who taught at Denbigh High with us, and meet her 18 month old son, Jamie. Lots of sweet photos to follow, I'm sure! Ryan also is keen to visit the National Archives and the Smithsonian which should be awesome. We're just hoping that the snow holds off so we don't free to pieces on the Washington Mall!! Can't wait though - should be a good few days.
Posted by LinkyLou at 11:08 am No comments: 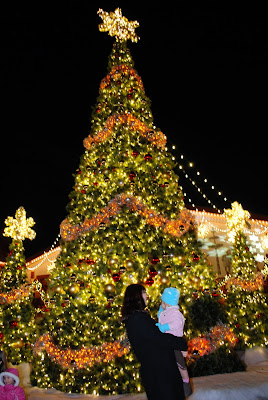 Another busy few days with lots of family time to enjoy. We spent Boxing 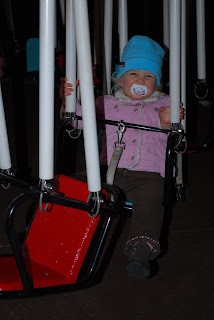 Day (the day after Christmas for all those non-Aussies) exploring the Christmas Town event at Busch Gardens, an amusement park near Williamsburg. They apparently had 1 million lights up - it was all very very pretty. Very very cold too but worth it! I was very sad that, being pregnant, I wasn't able to do any of the big rollercoasters :( but Cassie had a turn on her first amusement park ride - and loved it. She was a bit hesitant at first but as soon as it started, she was giggling and waving like a girl twice her age! There was no line so she had a second turn and chucked a HUGE tantrum while waiting for the ride to start again :) She also continued this when her second ride was over - despite her hands being almost frozen, I had to pry both of them off the handles and drag her off! Ah, my little thrill seeker. She also got to meet Elmo and gave him a huge kiss, going all the way into his throat like a little lion tamer! I think the actor inside may have been a little surprise. We ended the night by dragging all of Cassie's older cousins into the Sesame St Christmas show but it was all worth it as Cassie was SO excited to see all of her faves live on stage.

The other big excitement this week was celebrating the beginning of the "tens" decade - happy 2010! Robin had organised a beach cottage for us all to celebrate together, in Nag's Head, North Carolina, which is about a 3 hour drive from where we are staying. It was a lovely place and Cassie treated us very well, not falling down any of the three staircases and sleeping like an angel in a portacot in yet another strange environment. It was really really cold down there but we had a great time anyhow. We took the kids down to the beach on New Years Day - Cassie and I lasted about 10 minutes - to search for sea glass. It was really pretty down there, despite it being a bit grey out. See below for a couple of pics that Robin took - (funnily enough, Ryan looked at me like I was crazy to go wandering down to the beach on an almost freezing day, just to take pictures, and hence, went out to lunch with Jack instead....) 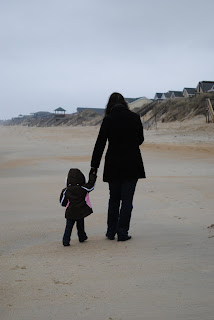 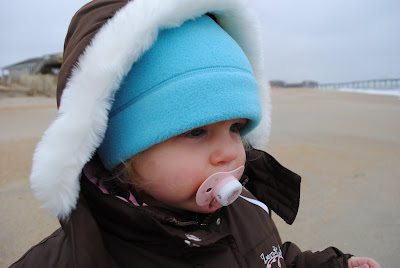 We're "home" again now in West Point, and hoping to see more of Ryan's dad this week as he's had a really nasty flu over the holidays. I've also got plans to do a LITTLE more shopping - for one thing, I have to buy another suitcase to take all this stuff home....
Posted by LinkyLou at 11:32 am No comments: