I bought a brown suede coat for $25 the other day in the sales here. I have just realised it's REAL leather too!! Whoo. I love shopping in America!!

Off to Prime Outlets this morning too :)
Posted by LinkyLou at 1:52 am 5 comments: 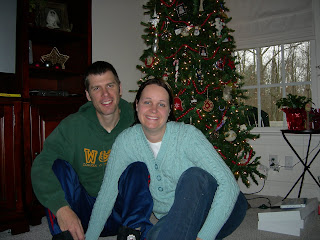 Just took this shot a second ago - it's Christmas morning here and the kids have just headed off to the other branch of the Lawson family tree to open presents! We decided to stay at Robin (Ryan's sister) and Jack's house last night so we could see the presents being opened and despite the 7.30am wakeup, it was well worth it!

We've had a great couple of days here in Virginia. On Saturday, we went to visit Ryan's grandparents who are doing well and were very pleased to see us. We'll see them again today hopefully. Then Saturday night, we had arranged a meetup point for all of our Denbigh teaching friends. Because we were so crazy at the end of the school year, we didn't really make a list of who could come and all, so we were only sure we were going to catch up with one person! Well, we ended up meeting up with about a dozen people, had a great meal and then adjoined to the new hotspot in Newport News. It was a great night and all the stories from NNPS surely convinced us that we're pretty blessed with our teaching jobs in Adelaide!!
On Sunday, Nancy (who is Ryan's sort of stepsister) and her husband Bryan, came around to Randy and Lucy's with her kids. Robin and Jack also brought Jared and Cate (our neice and nephew) and we opened presents with all five grandkids! It was so fun - I've forgotten the Christmas vibe with children in the mix. The kids all loved their Australian chocolate and Jared is very pleased with the model airplanes that I bought him and Ryan - they'll hopefully get a chance to build and fly them this week. Last night, we went to Ryan's mom's sister's house - Caroline. There were a lot of family members there who we hadn't caught up with and so that was lovely. We once again were extremely spoiled with gifts and also got to see the kids from that side of the family - they're all so big!!
Today, we've been up early and opening presents with the kids. Robin and Jack have taken the kids to see their grandparents so I have a moment of peace to update this. The kids are certainly high energy and perenially hyped on sugar at this time of year so we're reconsidering the idea of EVER having our own. Maybe the furbaby that can be put in the backyard when she's annoying is enough....
Ho ho ho to you all. We've got a few more days left here in Virginia and then we're off to New York for New Years. We've got a few plans that mostly involve the various malls in the area and the post-Christmas sales...Ryan is SO excited. I've already managed to buy 6 tops and a new pair of jeans so I have a groove going that can't be stopped! Hope the holidays were kind to everyone.
Posted by LinkyLou at 1:43 am 2 comments:

I've just worked out that I can upload photos from our digital camera so here are some choice ones! They don't do the trip justice at all as I can't use any of the one taken on the side which are all the cool ones :) 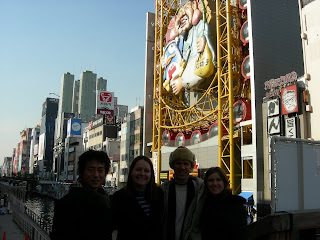 Here we are in Osaka - unfortunately I'll have to play around with the light as I had the camera on the night setting. 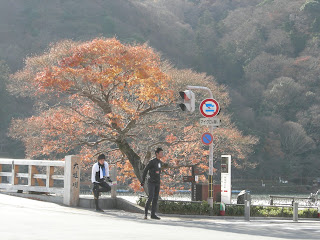 This is in Kyoto. These guys are touting for rickshaw passengers. Most of the trees had lost their leaves by the time we visited Japan but there were still some beautiful ones! 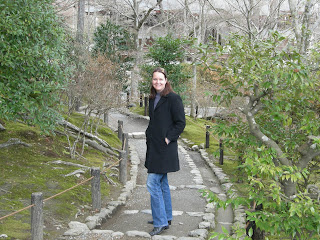 Here I am in a Japanese garden in Kyoto. It surrounds some beautiful old temples and was a glorious place for a walk.

Andrea, Miyao and Ryan eating all kinds of tofu and other yummy stuff at a restaurant in Kyoto.
Okay, it's taken me forever to work this out so I'll sign off now. Merry Christmas again!!
Posted by LinkyLou at 1:16 am 1 comment: