Well, a few weeks ago, I was inspired by Lisa, a friend from Mothers Group and also by the fact that we hadn't been away since July 2007, to arrange a spur-of-the-moment road trip to Melbourne. The lovely Sarah offered us a place to stay and once I had gotten over my initial freak-out at the thought of everything I had to pack, Ryan and I decided to brave it and do our first Holiday as Parents.

The packing, and the thinking about packing which was actually more arduous, was finally over by Thursday at 4pm and we headed off to pick up Cassie from childcare so we could hit the road. We'd had a slight change of plans that day as Sarah had come down with a fairly unpleasant illness so we were now staying with Catherine instead in a last minute switch.

Taking an hour or so to get through peak-hour traffic (yeah it was Adelaide, we have peak hour, dammit, especially on Glen Osmond Road!), we hit the freeway, with Cassie asleep in the backseat. All was pretty peaceful til Bordertown so that's where we stayed for the first night away. Cassie did really well in her portacot and we all woke refreshed the next day at 7am, ready for breakfast at the Bordertown Bakery (so good - definitely worth a stop every trip!) and a walking tour of historic buildings in town. The highlight was ex-PM Bob Hawke's childhood home which is now a Centrelink office (see photo below) and the old Takeaway (now closed) which is Bordertown's oldest building. 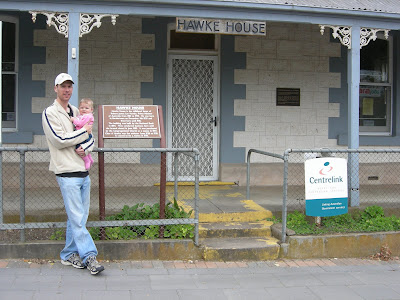 Driving across the country with a baby is pretty alright, for the most part. IF THE BABY IS RESTED. The rest of Friday was fairly uneventful until we stopped in Bacchus Marsh, just outside Melbourne, for a wander around Aldi (had to get those nappies that everyone keeps raving about!!) and then Cassie decided she was done. Upon strapping her in, she threw a fit and we screamed our way into Melbourne.

Saturday dawned with a early wakeup from Cassie for the household. Thankfully, Catherine has an excellent coffee machine. We went round to visit poor ol' Sarah who was much better but still probably a bit germy :) so she couldn't have a cuddle and then went on to Pam's, who was hosting a BBQ so we could catch up with people en masse. It was great to see Bram and Elizabeth's gorgeous girl, Amelia after all this time, and also to meet Harriet Scott who was born a week previously! It was also absolutely wonderful to see a lot of our Melbourne friends who we miss seeing regularly. Sadly, I didn't take the camera inside :)
After the BBQ would down, we headed to Julia and Rob's - who also have had a daughter since we saw them last!! It seems like a bit of a trend among our friends ;) We had a delicious dinner, thanks to Julia, and Cassie also got a ton of hand-me-downs from their girls (which kept her entertained for most of the trip home, so thanks guys!!)
On Sunday, we had the only social event that I organised in advance - a meet up with the girls from AYW. Breaking the trend, Michie had given birth to a BOY recently and Julia is working on a boy too! It was great to meet Michie after years of chatting on line and to see Julia and Ronan again. Ryan suffered through our talk with remarkable patience, helped by the pancakes, bacon and eggs on offer. Ryan and I spent an hour or so wandering around Chadstone after saying goodbye to the girls - we only meant to have a QUICK look around but the place is a rabbit warren with NOT ENOUGH LIFTS, We're still a bit scarred from the experience and won't be heading back to the "Fashion Capital" in a hurry. 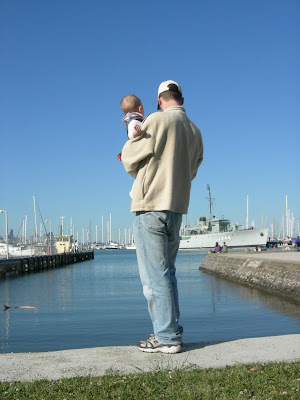 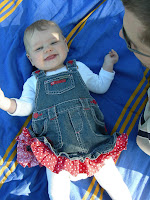 We decided to make the most of our weekend pass on the CityLink and crossed the city again to Williamstown to visit our old haunts and have some gelati in the sun. We pulled out the picnic blanket and played on the grass for a bit with Cassie which she loved. I think it was the only time for the whole trip where we actually had perfect weather. Sadly, my favourite store down that way doesn't open on Sundays so I had to make do with just looking wistfully in the window :)
When we got back to Catherine's, it was time to head off again to dinner on Sydney Road with our host and our would-be host :) Yummmy Thai food!
On Monday morning, we had our first sign of things to come - Cassie is teething and had a restless night, followed by an even more restless morning. We ended up having to cancel our morning plans and were terribly late to meet the gracious Sarah Willy for a late lunch on Brunswick Street. Sadly, I didn't take the camera AGAIN! On our way out of the city, I caught up with another AYW friend, Meagan, and met her gorgeous children as well. Finally leaving Melbourne at about 6.30pm, we drove to Geelong and had a great meal out at a lovely pub near the water.
The next morning dawned pretty cold and blowy so we drove the Esplanade but that was about all we could see of Geelong's main tourist attraction. It looked very pretty despite the weather so we hope to go back sometime in the future. We did wander around the shopping precints which was fun - we found a great candy store that not only sold Dutch liquorice and American chocolate but also sold Jolly Ranchers!! We jumped in the car and drove to Warrnabool where we still didn't spot any whales off the coast :( but did have a nice lunch despite a very grumpy baby. Getting back in the car, Cassie alternated between sleeping and whinging but did pretty well until we checked into our hotel in Mt Gambier where she threw a fit and basically condemned us to a dinner of cookies and drinks from the vending machine so she could sleep. 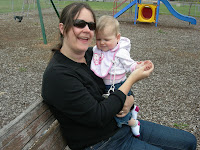 Today was the last day of our trip and we set off fairly early from Mt Gambier because it was raining again, driving pretty much non-stop to Padthaway. We stopped for a drink there and found a bit of sun and a fun playground where Cassie had her first slide and a swing. The rest of the trip passed quickly and now we're home with a tired little girl who is very glad to be in her cot again. We're not too sorry that the trip is over either, and are glad that there are four more days before term 4 starts so we can recover from our holiday! 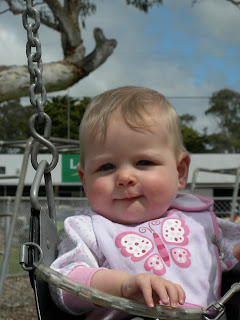