A fun week so far again.

We've not done a huge amount, just visiting with family and a few minor shops. On Tuesday, we toured the historic little town of Smithfield which was cool, including visiting the oldest church in the US, built in the early 1600s. We also went out for some spectacular BBQ last night - at a CUTE little family place called "Frank and Bubba's". (For those not in the know, BBQ here is slow cooked pork, "pulled" (shredded when it's tender enough to fall apart anyhow) and mixed with sauce and vinegar. It is far far far too good. Cassie wouldn't try it but is a big fan of hush puppies :) 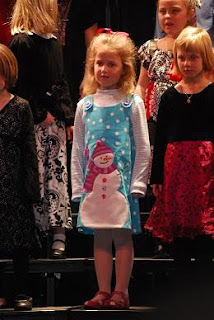 Today, Ryan, Robin, Cassie and I hit the outlet mall - $300 or so later and I am half-sated. (That was pretty much in three stores...there's still 40 or 50 to go!) We then had some awesome Mexican food (Australia, learn learn learn!) and then came back to Robin's to pick up her kids, before heading to the local school to see the junior grades of the Elementary school in their Christmas concert. See left- our niece Cate, who is just cute as a bug. As we headed out, it began to snow and it's been falling steadily ever since. I just hopped outside to take the first shot below about ten minutes ago. It's so gorgeous and still out there - and I think we'll be sleeping over at Robin and Jack's for another night at least! Not wanting to drive on icy, snowy roads in a hurry!!! Cassie wasn't sure what to think of the snow at first and even her cousin Jared couldn't convince her to walk on it, but kind Momma Lynn just picked her up and dumped her in it and she soon got over that. She loved it after that and threw an absolute fit when I brought her inside because she wouldn't keep her hand covered and kept digging in it! She's hopefully going to sleep well tonight - can't wait to take some more photos tomorrow! 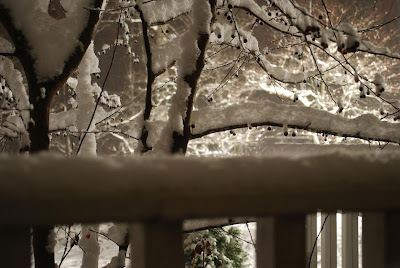 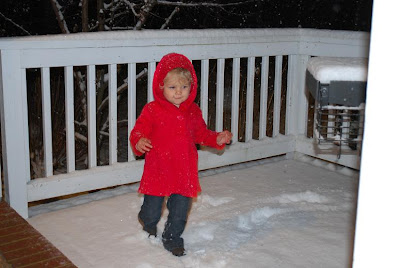 Okay, now I'm jealous. About two things actually. Firstly, I want a pulled pork sandwich. But then, the snow.

The only snow we've had here so far was precisely during the one hour in which I was changing a flat tire in the UVic car-park (sigh!).