...but all the saving has been worth it!
A quick roundup of this week so far:
Well, the first two days of this week, we were in Australia!! That seems crazy to believe now. Despite my good intentions, it was still a manic rush on the last night and I was finishing up some vital sewing at 1am - two items I haven't actually used yet :)
We were at the airport bright and early the next day and ran Cassie ragged. She particularly liked running the crappy airport stroller around into other passengers - yes, we are those parents occasionally - but was happy enough to sit and look out the window for the entire flight to Sydney as a result. We did a race across Sydney airport (why are the Qantas connections so ridiculously close always??) and then we were on the "big flight" - 14 hours with a 21 month old. Well, despite everything I'd anticipated, it was actually not bad at all. Hurrah for Qantas - the steward kindly upgraded one of the passengers next to us to premium economy and so we had a spare seat which was great, plus their inflight kids entertainment included two episodes of "In the Night Garden" which Cassie was happy to watch about six times through without sound. I am sure the rest of the passengers LOVED the constant cries of "UP D" and "ACK ACK ACK" but at least she wasn't screaming. She didn't really sleep on that leg but blissfully, she slept for about four hours after running herself COMPLETELY ragged in LAX so we all got a nap in. Arrival in New York was simple enough but joy of joys, we discovered Qantas had left our pram in Sydney. It's not great to carry a 13kg toddler around the city that never sleeps after 4 hours of sleep in 30 hours...just sayin'. 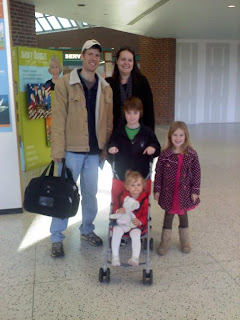 Our New York stay was pretty brief. Admired the skyline and found awesome NY pizza which was good. It's not American pizza unless you have to blot it with a serviette :) The next morning we were headed to another airport for the hour ish flight to VA. Ryan's dad, his wife, Ryan's sister and her kids and it was SO great to see them. Cassie took to her two big cousins immediately, letting Jared push her around in the stroller and giggling her head off. So sweet.
On Friday, we tried to sleep in (I'm not doing so well in the jetlag department - why I am typing this at 5am!) and then had a lazy morning before meeting Ryan's sister, Robin for more cousin time and chat. Saturday was fun as we celebrated Ryan's dad's birthday with all the kids and also Nancy's daughter and grand-kids. With six kids barrelling around the house, we didn't stop laughing all day. And today was Sunday so Ryan decided to indulge in some much-missed Sunday football with his brother in law, while they watched all of the kids - in theory. Not sure how much "watching" was going on, but Cassie did learn to burp on cue. How lovely. Ryan's sister and I escaped the kids to drive up to a mall near Richmond and do some much needed, last minute Christmas shopping. Is it last minute yet? I hope not, because otherwise I'm in deep trouble. I checked out the most adorable kids' clothes today but I've been quite restrained so far...so far....
So that's it til now. Happy 6am everyone - hope your holidays are going well and all is happy as it should be. A few pics to end the post - Ryan and Cassie all rugged up for the cold and Cassie with her cousin, Cate! 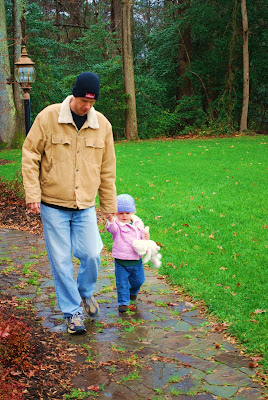 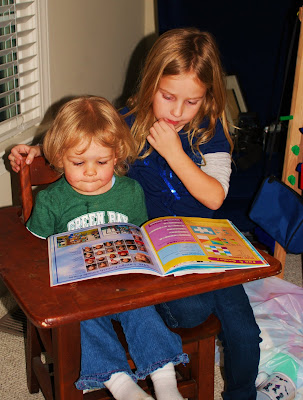 wow Lynn looks like soo far so good. Hopefully you get in so much more shopping

Looks like fun, though. Congrats on surviving the flight.

But glad you had a good flight - bodes well for the trip back. Hope you guys have a great Christmas!